Holiday in Barbados, 40 years on 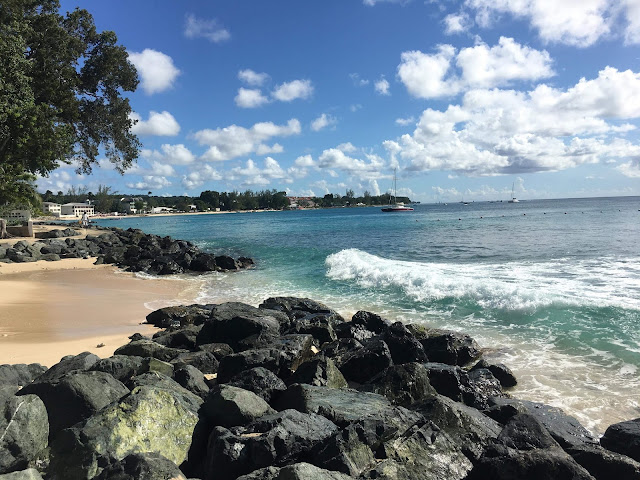 Our first trip to Barbados was in September 1979! We stayed in a self-catering apartment at the Silver Sands Hotel for 3 weeks at the tail end of the hurricane season - and it was fantastic!

We recently returned for a couple of weeks self-catering in an apartment near Hastings and, guess what - it was fantastic!

The essence of Barbados hasn't changed. It remains totally laid back yet modern. Everyone has smartphones and multiple TV channels but the traffic has increased by about 1000% and some of the vehicles wouldn't pass an MOT, even with a hefty bribe. Very few roads have unbroken surfaces, there are meaningless signposts and the road maps are not exactly accurate. Advice: just chill. The west coast area is mostly navigable but don't expect an easy journey inland or towards the east coast. After realising that we'd driven through the same village a couple of times, we gave up.

We failed to find Eddy Grant's place but succeeded in finding the underground water caves (well worth it) and the nearby gully/nature walk that Ainsley Harriott likes.

There are monkeys that occasionally roam around and we were lucky enough to witness a baby turtle rescue operation. Turtles from newly hatched eggs are collected for their own safety and released in a safer environment where there are fewer predators. This was amazing as, a few years ago in Tobago, we had witnessed a giant turtle burying her eggs on the beach.

Shopping in Barbados isn't cheap and eating out costs more than our local pub in the UK (there's a price to pay for a fabulous setting). However, everyone we met was friendly and polite, crime rates are fairly low and we had a fantastic time.

Our favourite thing to do was to walk along the boardwalk at the edge of the beach, starting just before sunset. Wow! 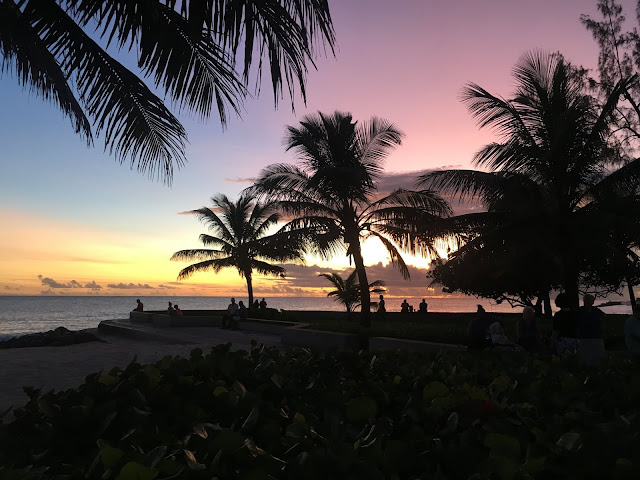 We've been to Wales before so, obviously, we packed for wet weather. Our plan: visit Portmeirion and Snowdonia and a few relatives who we've not seen for years.

Of course, plans are for breaking so we abandoned them and wandered around Anglesey and the North Wales coast. We walked through a woodland where there was a hide for watching red squirrels; we visited Holyhead where there was a small maritime museum; we ran out of time to visit the nearby gardens and manor. Our favourite visit was to Beaumaris Castle (A UNESCO World Heritage Site) details on gov.wales/cadw.

The ‘new’ bridge to Anglesey leads to the famous little village of Llanfair­pwllgwyngyll­gogery­chwyrn­drobwll­llan­tysilio­gogo­goch but we preferred to use the beautiful original Menai bridge. And, as it was our anniversary while we were on Anglesey, we ate at a very nice restaurant, Harry’s Bistro  at Henlly’s Golf Course.Also, there was a family gathering, organised within 48 hours, just for us! All aunts, uncles and cousins who live in the area assembled near Conwy Castle and we all had a lovely time.

Finally, just to say that we have been to Portmeirion before, the last time was 20 years ago and it was fascinating. It has its own brand of ceramics and was where the cult TV show, The Prisoner, was filmed around 50 years ago.

Scottish Highlands - self catering in style

I've discovered a fantastic house on the west coast of Scotland, sort-of near Inverness. Just looking at the photographs on the website and reading about the facilities in the area made me want to holiday there! Additionally (though not necessarily for me) there are rugged activities, such as mountaineering and kayaking.

The dining options look great but it's the house itself that is the draw. It's in a fabulous location overlooking a sea-loch and walking distance to the village & pub. There must be opportunities to see glorious sunsets and the Northern Lights.

Inside the house is top quality. It's spacious with high quality finishing and furnishing - and there's even a steam room. It has four double bedrooms so the not-inexpensive costs of hiring for a week can be shared between four couples. Let's face it, if you want cheap, you can find loads of place to 'slum' it! I shall try to find some suitable friends to share this wonderful house in the next year or two, possibly staying in Edinburgh for a night or two on each leg of the journey.

Take a look at the An Cos in Shieldaig website and see if it makes you want to visit.

Photograph from their website. I'm sure they won't mind if it results in more visitors!
No comments:


A post-hurricane, pre-Christmas trip to Florida was very pleasant: ten days of sunshine with temperatures in the high 20s Celcius.

We took a small suitcase each plus one empty one, so our first outing was a trip to one of the Designer Outlets just off the i-4, to buy our holiday clothes and save at least 50% off original $ prices. It wasn't quite straightforward as many shops were stocking for the 'cold' winter to come. Always a plethora of T-shirts and a good choice of sports shoes, though.

Not too busy. Having avoided Disney parks during our previous visit, we spent two days exploring Epcot, Hollywood Studios and Animal Kingdom - this time, we took the Jeep Safari in the dark and it was worth it! The animals, especially the lions, were more active at night than during the hot days. In the Studios park, we also enjoyed the Indiana Jones Stunt Spectacular.

We spent two days at Universal Studios and Islands of Adventure, our favourite theme parks. At the Studios, we absolutely had to go on the Men In Black Alien Attack ride, an all-time favourite. The triple-decker Night Bus was parked outside the Leicester Square tube station fascia and, two doors along, Kings Cross station housed part of the Harry Potter world - you could also board a train to Hogwarts in the other theme park. We also discovered a great new ride, a 3D simulation, racing through New York (via the Moon) against Jimmy Fallon's Tonight-rider - great fun!


At Universal's Islands of Adventure, we headed straight for the Marvel area. Sadly, Stan Lee's death had been announced only a couple of days earlier - but what a legacy he spawned! Another all-time favourite ride, Spiderman, had a short waiting time so we went there first, before exploring further. Discovering another new ride - Skull Island: Reign of Kong - we endured a waiting time of 45 minutes - and we are glad that we did. On board an old bus, we were transported through a land of rampaging dinosaurs under the protection of King Kong. There was so much going on all around that, had it been a 15-minute queue, we'd have gone round again to take it all in.

We stayed in a luxury villa with private pool in a gated community. It was the perfect place to relax.

The usual! We ate at the RainForest Café just inside Disney's Animal Kingdom, Bubba Gump in Universal's City Walk (tip: parking is free after 6pm if you want to use the restaurants) and Cheesecake Factory in downtown Orlando.

Our only regret is that we should have stayed longer!
No comments:

Our first visit to Bruges for almost 30 years - yet it's so close and easy to drive to! It was a last minute decision, based on having a free weekend coming up, that promised to be sunny and warm. So we hit the internet and booked our ferry and hotel!

We drove to Dover, sailed to Dunkirk, and were in Bruges / Brugge less than an hour after docking. We stayed near the centre in a quaint hotel (Martin's Relais Hotel) which was perfect for the weekend - we had our own front door which led to the room above a small garage (possibly a former stable).

On leaving the hotel's courtyard and turning left, we were a few steps from a couple of small cafés which faced Jan Van Eyck place, complete with statue and a bench that was featured in a scene in the film 'In Bruges'. The bench faces a canal which is now home to a large blue whale, made from recycled plastic rubbish.

From here, we could walk along canal paths, taking photographs of some interesting architecture and waving to tourist boats. Alternatively, 5 minutes stroll (350 metres) in the opposite direction will take you to the famous tourist spots: the medeival belfry tower, the gothic style courthouse, the beer museum... A little further on is the Town Hall with carriage rides outside, the Duc de Borgogne hotel-restaurant and a couple of places to buy your ticket and board your boat for a canal tour.

There are chocolate shops everywhere and a plethora of restaurants to choose from.

If you travel by train, it takes about 3.5 hours from London (via Brussels!) which is faster than by car and ferry. Brugge station is at the south-west of central Bruges, near the beautiful Minnewater park and gardens, a lovely place to walk and relax. It's not far from the brewery tours which, sadly, we had no time to fit in.

These are our highlights for a short stay but there is more to see and do so we shouldn't leave it so long before our next visit. If you have any recommendations, please leave them in the comments.

One warning: there are many, many people on bicycles so, when walking, you need to be vigilant!


We went to the Edinburgh Fringe Festival again, which we love! Whilst in Bonnie Scotland, we decided to visit the Falkirk Wheel, which had been recommended to us for a day trip.

It's an incredible piece of engineering. Set in the middle of nowhere, where two canals attempt to meet (except for a few metres, vertically) so this high-tech lock assists the canal boats, enabling them to continue their journey. Two narrow boats can be loaded each side so that two go up and two go down. There is a charge - quite reasonable - for this service.

On site is a café, shop, playground, picnic area, water-based activities and walks. From the wheel, at the lower canal (pictured), there is a footpath to the higher canal where there is also a shortish tunnel that you can walk through (maybe take a torch for this). Take a look at this short video.


The Clyde-Forth canal joins the West and East coasts of Scotland.